Thinking Outside the Mask with COPD

This trial furthered evidence that Vapotherm therapy could successfully manage hypercapnic respiratory distress. But it also raised the question of how specifically the COPD patients from this trial compared between the two tested modalities. Approximately one third of the patients in the trial—65 out of 204—had a discharge diagnosis that included hypercapnic respiratory failure or COPD.

Doshi and colleagues completed a subgroup analysis that addressed this question of how COPD patients on high velocity therapy compared to NiPPV. They found that even among these subgroup population patients that traditionally would have required mask-and-pressure-based treatment modalities to manage their hypercapnia, Vapotherm therapy had comparable outcomes to NiPPV in the treatment of undifferentiated respiratory distress.

The researchers assessed the ventilatory effect of high velocity therapy on the COPD patient population from the larger randomized trial.3 A total of 65 patients met the subgroup analysis criteria—34 high velocity therapy, 31 NiPPV. The primary outcomes were change in PCO2 and pH over time. Secondary outcomes were treatment failure, as evidenced by therapy crossover and failure requiring intubation.

The authors found that the changes in PCO2 (Figure 1) and pH (Figure 2) trended similarly between the two study arms. This indicates that, for patients in this study, high velocity therapy had comparable ventilatory efficacy to NiPPV.

Figure 1. PCO2 Trend Over Time. Adapted from Doshi 2020. High velocity therapy does not provide the total ventilatory requirements of the patient. 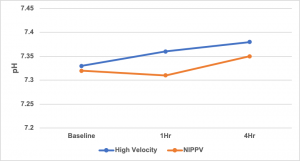 Figure 2. pH Trend Over Time. Adapted from Doshi 2020. High velocity therapy does not provide the total ventilatory requirements of the patient.

The salvage rate for both groups following crossover was 75%. In other words, if the clinician perceived the patient as failing on one therapy and crossed them over to the other, the other therapy was able to keep the patient from intubation 75% of the time.

Potential Advantages of Vapotherm High Velocity Therapy Among These Patients: No Failure to Tolerate and Less ICU Time

The subgroup analysis found an interesting trend among the high velocity therapy patients in that they spent less time in the ICU in this study. There was no significant difference in overall length of stay. The only care areas that had significant LOS difference were the ICU and the step-down floor. High velocity therapy patients spent significantly less time in the ICU and more time on the medical floor and step-down unit. Table 1 shows the breakdown.

The two patient groups were comparably sick, with comparable APACHE II Scores on admission. The overall Length of Stay (LOS) suggests that they required comparable hospital stay durations. The patients’ physiological measures over time also show this similarity between the groups. The difference in patient disposition could have several explanations. It could be based on hospital protocol in that some hospitals require NiPPV patients to be admitted to the ICU. It could also be due to clinician perception. Doshi reported that the clinician perception of the patients’ respiratory response, comfort, and the simplicity of use of high velocity therapy was significantly better than NiPPV in the original trial.1 These are factors that may also contribute to the decision to disposition a patient outside the ICU. If this finding of a shorter ICU stay can be replicated in a larger trial, it would have significant implications for hospital workflows as well as cost savings.

One key limitation of this study is that the original trial was not powered specifically for this subgroup analysis. Additionally, the baseline PCO2 was lower in the Vapotherm therapy arm which may have some clinical relevance despite it not being a statistically significant difference. Despite these limitations, the authors concluded that the results of these analyses suggest that Vapotherm therapy “may be considered another noninvasive ventilation therapy, that is available in managing patients with acute hypercapneic respiratory failure.”