In April 2020, Doshi and colleagues published the results of a subgroup analysis in Heart & Lung titled “The ventilatory effect of high velocity nasal insufflation compared to non-invasive positive-pressure ventilation in the treatment of hypercapneic respiratory failure: a subgroup analysis.” The analyses examined the hypercapnic sub-population of a multi-center, randomized, controlled, non-inferiority trial. The larger multi-center trial found that High Velocity Nasal Insufflation (HVNI) had similar outcomes to Noninvasive Positive Pressure Ventilation (NiPPV) in adults presenting with undifferentiated respiratory distress in the Emergency Department (ED).1 Similarly, the subgroup analysis concluded that HVNI may provide ventilatory support comparable to NiPPV in this hypercapnic sub-population.2

The larger multi-center trial on which the subgroup analysis draws, randomized ED patients requiring non-invasive respiratory support to be treated with either NiPPV or HVNI. The primary outcome was therapy failure at 72 hours following enrollment. Therapy failure was indicated by intubation or all-cause arm failure, as clinician-directed crossover to alternative therapy was an option. The subgroup selection for this analysis was established during the original study design and included those patients who either had: 1) a primary diagnosis of acute exacerbation of COPD (AECOPD) or 2) acute hypercapnic respiratory failure at discharge. 34 patients randomized to HVNI and 31 to NiPPV met this a priori subgroup criteria.

The patient baseline characteristics between the two groups differed in only two categories: therapy setup time and initial respiratory rate. The therapy setup time for NiPPV was 6 minutes vs 10 minutes for HVNI. The initial respiratory rate for NiPPV was 28 breaths/min and 32 for HVNI. All other characteristics were similar between the study arms.

Primary outcomes examined were the PCO2 and pH changes over time. They were found to be comparable, indicating that HVNI, among patients in this study, provided ventilatory support similar to NiPPV.

Regarding the patients’ physiological measures over time, they trended similarly between the two therapies, as seen in Table 1: 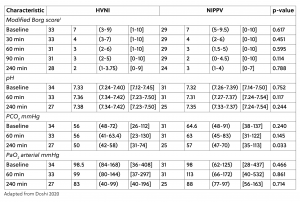 Furthermore, there was also no significant difference in intubation rate (16.1% NiPPV, 5.9% HVNI) and in all-cause therapy failure (25.8% NiPPV, 23.5% HVNI). The salvage rate for both groups following crossover was 75%. For both therapies, if they failed, half the time it was due to failure to ventilate. For the NiPPV arm, the remaining half of failures occurred due to an inability of the patients to tolerate the modality. It is interesting to note that none of the HVNI failures were due to an inability to tolerate the therapy.

Given that HVNI salvaged 75% of the patients intolerant of NiPPV, the data suggest that a larger follow-on trial may be valuable to help determine if HVNI could be an NiPPV alternative to try in this patient population before using intubation.

The length of stay (LOS) overall was also similar between the study arms, however, the breakdown of LOS per hospital area showed some differences. These HVNI patients spent less time in the ICU than the NiPPV patients, but more time on the Medical Floor and in Step-Down units. Table 2 shows the breakdown.

Limitations of the analysis include the fact that the original trial was not powered for this subgroup analysis. Additionally, although not statistically significant, the baseline PCO2 was lower in the HVNI arm which may have some clinical relevance despite it not being a statistically significant difference. Despite these limitations, the authors conclude that the results of these analyses suggest that HVNI “may be considered another noninvasive ventilation therapy, that is available in managing patients with acute hypercapneic respiratory failure” and call for further research.

The study was conducted on Vapotherm high velocity therapy, which at the time of publication is the only device capable of delivering HVNI across all interface sizes.