In September of 2016, the report of the HIPSTER trial came to press in the New England Journal of Medicine.1 The HIPSTER trial was a prospective, multicenter randomized controlled trial evaluating the outcomes for High Flow Nasal Cannula (HFNC) compared to nasal continuous positive airway pressure (nCPAP) when used as a primary means of respiratory support in neonates.

At the time when this study was conducted, it was common to conflate Hi-VNI Technology with HFNC which is why a minority of the products included in this trial under the umbrella of HFNC were Vapotherm devices delivering Hi-VNI Technology (only 6 of the 278 patients (2.2%) in the HFNC group were treated with Hi-VNI Technology). This conflation is understandable as Hi-VNI Technology is only recently coming to be recognized as Mask-Free NIV™ for spontaneously breathing patients, and thereby seen as a separate category from HFNC both in terms of indications for use and FDA classification.

The HIPSTER trial represented a next step to prior work from this author group, wherein their previous work reported non-inferiority between HFNC and nCPAP when used as post-extubation support for infants who required immediate intubation. In this current trial, patients were enrolled who were at least 28 weeks gestation (block randomized between infants < 32 weeks and infants ≥ 32 weeks), less than 24 hours old and had not previously received endotracheal intubation. The primary outcome was treatment failure within 72 hours based on pre-specified criteria, and patients who failed HFNC could be “rescued” with nCPAP. A secondary endpoint was intubation rate. The authors mitigated bias to consider the experimental arm (HFNC) a failure by excluding patients < 28 weeks gestation, where the greatest failures were seen in their previous trial of post-extubation use, and defining very specific criteria for failure.

With this negative finding for the HIPSTER trial, Vapotherm wants to be clear regarding several specific points related to this trial and contrasting this trial against the other major literature that exists in the neonatal patient population comparing both Hi-VNI Technology and other devices to nCPAP.

It is important to reiterate that the HIPSTER trial was not a trial of Vapotherm  Hi-VNI Technology. Although the paper states that both the Fisher & Paykel Optiflow Jr and the Vapotherm Precision Flow were used, only 6 of the 278 patients (2.2%) in the HFNC group were treated with Vapotherm (per the online supplemental materials). Hence, the HIPSTER trial was in effect a study of Fisher & Paykel Optiflow Jr without the power to draw conclusions related to Vapotherm.

Vapotherm’s Precision Flow® system and the Fisher & Paykel Optiflow Jr are not comparable devices. Vapotherm contends, with the support of clinical evidence 2-8 Hi-VNI® Technology has a more pronounced clinical impact.

For a trial of Hi-VNI Technology, we should look to:

Lavizzari’s primary endpoint was intubation; unlike the HIPSTER trial there was no established protocol to rescue Hi-VNI Technology patients with nCPAP. Failure rates for Hi-VNI Technology and nCPAP/bi-level were 10.8% (17 or 158) and 9.5% (15 of 158), respectively. Like the HISPTER trial, enrollment criteria called for infants at least 28 weeks gestation who required non-invasive therapy as initial support for respiratory distress and the acceptable margin for non-inferiority was set to 10%.

Consider the following points of comparison between the Lavizzari and HIPSTER studies:

A matrix of the substantial trials in neonatology demonstrates this consistent trend for Hi-VNI Technology’s efficacy compared to the Fisher & Paykel system. The below study matrix and discussion points reinforce the superiority of Hi-VNI® Technology in similar clinical scenarios. 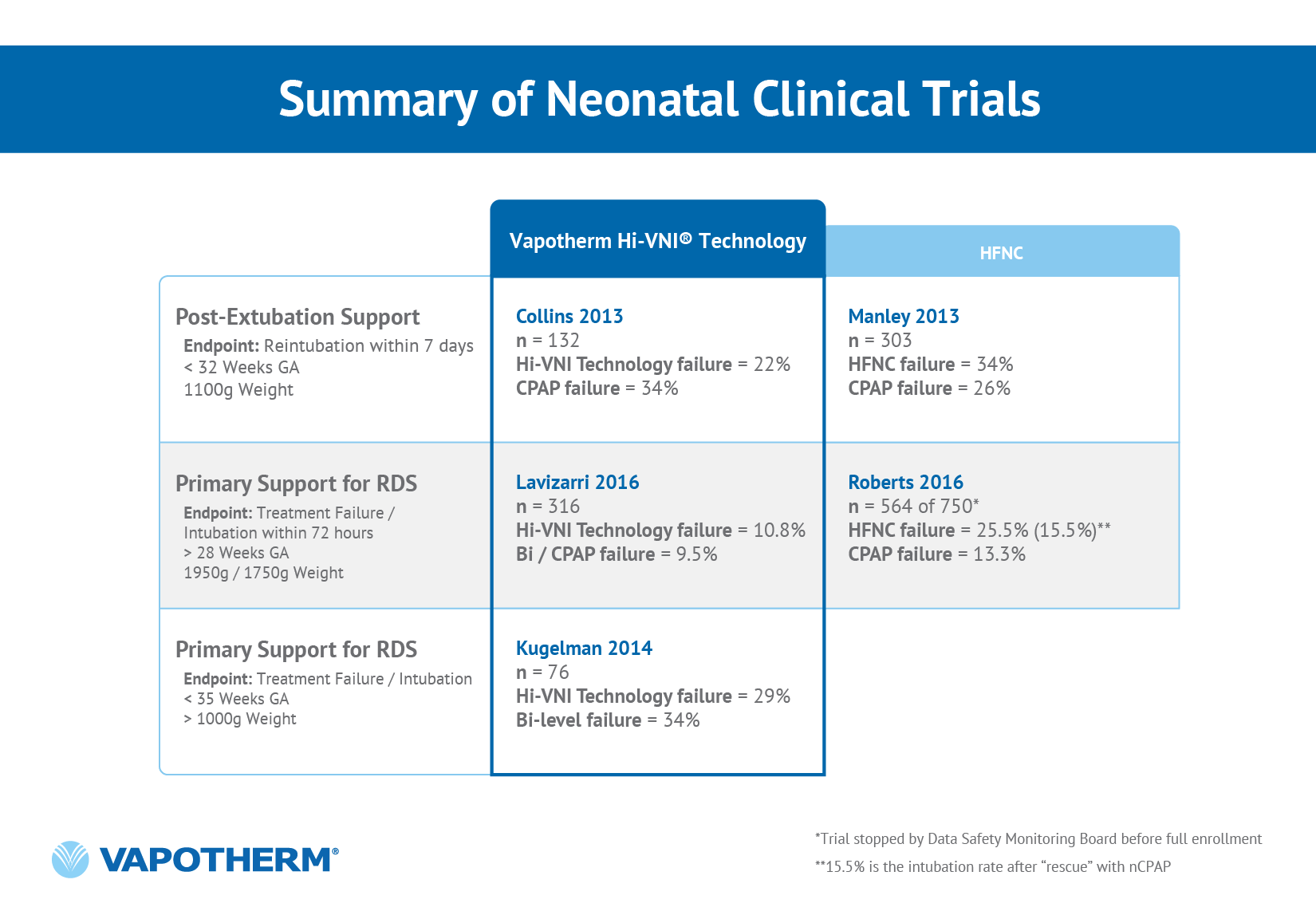 The above figure is a matrix of the major neonatal prospective, randomized clinical trials for HFNC. The columns divide the trials into Vapotherm Hi-VNI Technology vs Fisher & Paykel, while the rows divide the trials between post-extubation support, initial support (Lavizzari and HIPSTER) and a trial of Vapotherm compared to Nasal Intermittent Mechanical Ventilation (NIMV). Consider the following points:

Conclusion
Taken together, there is a consistency in the clinical literature demonstrating Hi-VNI Technology to be at least equivalent to other non-invasive ventilatory support modalities for the symptoms of infant respiratory distress syndrome. On the contrary, Fisher & Paykel failed to meet non-inferiority criteria for initial support and arguably shows marginal non-inferiority as support following extubation.