A new multicenter randomized trial published in the New England Journal of Medicine demonstrated yet again that high flow nasal cannula (HFNC) is not a viable alternative to CPAP for primary respiratory support in neonates.1 The study, conducted by Manley and colleagues, randomized 754 infants in respiratory distress to receive either CPAP or HFNC (Optiflow Junior, F&P) with the primary outcome of treatment failure within 72 hours. The authors concluded that HFNC is not noninferior to CPAP.

This outcome echoes the 2016 HIPSTER noninferiority trial between HFNC and CPAP,  which overwhelmingly used HFNC and had to be discontinued on the recommendation of the safety monitoring committee due to the higher rate of treatment failure for HFNC.2 In contrast to HFNC, similar noninferiority studies conducted with high velocity nasal insufflation (HVNI) have shown noninferiority to CPAP as well as Bi-Level PAP for primary respiratory support in neonates.3,4

HVNI is not HFNC
Amidst this increasing body of tier 1 clinical evidence that HFNC is not as effective as CPAP for providing ventilatory support to neonates, it is important for clinicians not to conflate all treatment options that have cannula interfaces. This is sometimes very hard to do because most studies still don’t differentiate between HFNC and HVNI and lump both in under umbrella terms like “nasal high flow”, “heated, humidified high-flow nasal cannula” or the likes, even though HFNC products are classified under a different FDA product code than the Precision Flow Hi-VNI™ system.

Clinicians who stay truly informed on the clinical literature look closely at what devices were used in which study to determine whether it’s a HFNC study (for example, Fisher and Paykel® devices) or a HVNI study (Vapotherm® devices).

HVNI is an attractive alternative to CPAP and Bi-Level PAP for Infants
When we look at studies conducted exclusively with Vapotherm Hi-VNI® Technology, which delivers HVNI, the pattern of non-inferiority to CPAP becomes apparent not just as post-extubation support for infants5, which is the traditional role of HFNC, but importantly as primary support as well.

The below table depicts a summary of some of the most recent clinical literature which helps to see the significant differences in outcomes between HVNI and HFNC. 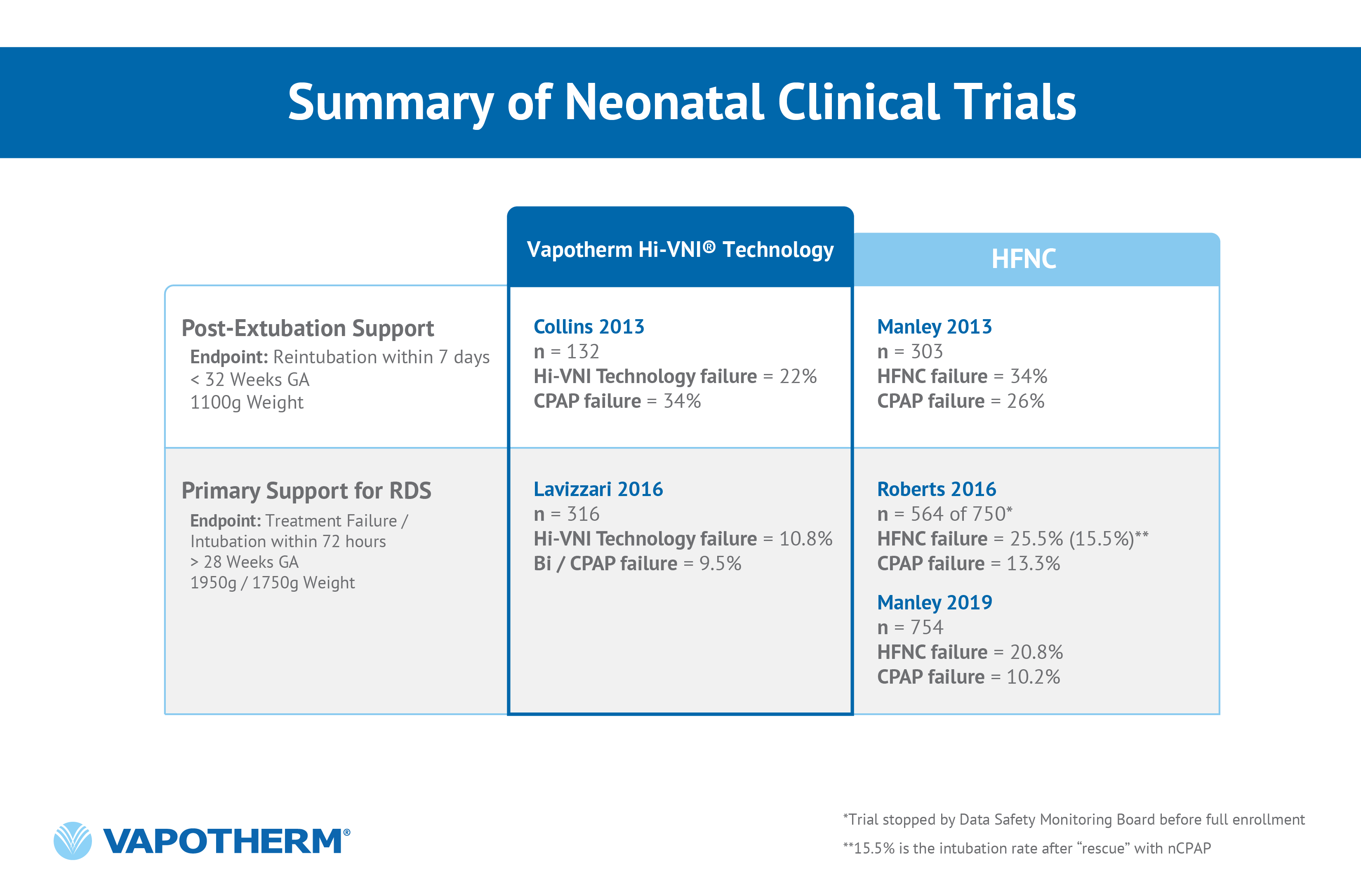 In addition to the trials summarized above, a recent retrospective analysis by Zivanovic and colleagues further bolsters the clinical evidence that HVNI provides effective primary support for preterm infants.6 In the study titled “Nasal High-Flow Therapy as Primary Respiratory Support for Preterm Infants without the Need for Rescue with Nasal Continuous Positive Airway Pressure”, the authors analyzed the outcomes of 381 preterm babies who were stabilized with CPAP in the delivery room and then transitioned to HVNI for primary respiratory support. The authors conclude that HVNI provides effective primary respiratory support for premature neonates.